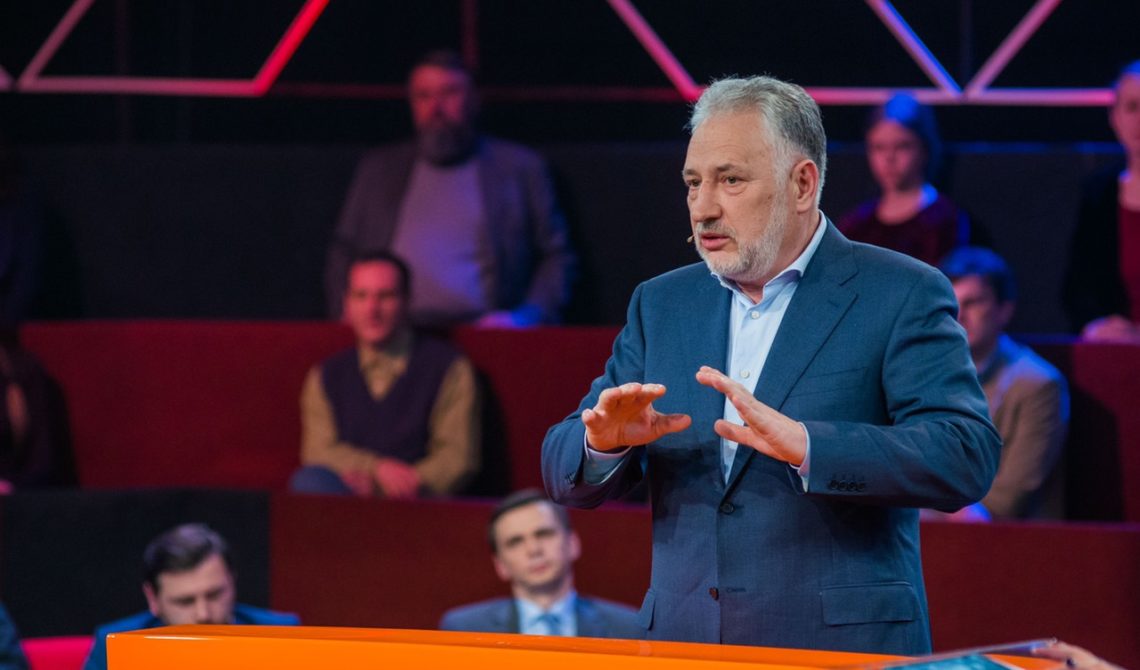 Interview with the Leader of the political party Republican platform Pavlo Zhebrivsky on the current agenda of Ukraine.

–Tell us, please, Pavlo Ivanovich, the elections took place, next there is matter of the formation of the coalition and, accordingly, the government. Tell what are your forecasts, expectations? Who will create a coalition?

Actually, first of all lets make an analysis of what happened. In fact, we can have a monocoalition from the government of the Zelensky party. During the time of independent Ukraine in one faction – the Regions – there were 186 parliamentary mandates. In fact, no political force was able to create an independent government. Why this happened?

There are three main reasons.

Each subsequent authority is a derivative of the previous one. And the voting for Zelensky and his “cover” (I can not call it the party), in fact, largely happened due to the lack of perception of many things conducted by the former president and the coalition.

The second component is part of Russia’s hybrid war against Ukraine, when they were able to impose on Ukrainian society that the main enemy is not sitting in the Kremlin, but the main enemy is in Kiev. The Russians, along with the fifth column in Ukraine, managed to impose such an agenda. I hardly can say that the previous authority was holy and divine. Enough mistakes, misses, inappropriateness and bad things done. But they did a lot of good things, which in fact saved Ukraine as an independent state.

The third component of such a result is the voters themselves, who are few enough … to think critically about the situation in Ukraine. Many want a miracle: to wake up – and everything was fine. Many wanted to be deceived for everything good against everything bad and put their hopes on a man who saw a Holoborodko and such a boy from his village, his township, like them. Because they choose not the best, but choose their own like.

These are the three components of the results of these elections. But the key issue is still on the side of the past authorities. Responsibility lies also partially on me, since I have been working for three years as the head of the MCA in the Donetsk region.

– You said that there are some specific positive things made by the previous authorities. What would you call positive?

First, it`s formation of anti-Putin coalitions in the world. These are sanctions against the Russian aggressor. This is the assistance of our Western partners, both financial and political. The second question is, nevertheless, the construction of the army. To say that it is actually a superstitious and a dream is still far from a dream … But, of course, it is completely different than it was before the 14th year, before the Russian aggression against Ukraine.

The third question – this was enough launched infrastructure projects in Ukraine. And they were implemented in one way or another. Especially I can emphasize in the Donetsk region that in some directions over the past three years more than 25 years have passed. It is education, ecology, parks and youth policy … Only in the 17th year more than 80 youth centers were created. This is also a sport. This is the promotion of housing for orphans. In some territorial units in general, all orphaned children received housing. This is the renewal of the bridges.

– Are you talking about the Donetsk region now?

Yes, about Donechchina … But in other areas too, a lot of things were done … It’s about the roads … For example, when I traveled to the frontline from Kharkiv in Debaltsovo in 2014, I rode 2,5 – 3 hours from Izyum till turn to Slovyansk, now it is possible to drive it for 1 h 10 min – 1 h 15 min. And roads were made all over the country.

There were positive things, except for those negative ones, which many spoke and spoken. In fact, criticism should be balanced. But the blow was missed by the authorities who could not resist the Russians’ information policy.

What will be in the future? There are two options.

Mono-coalition Zelensky will form … on the basis of his faction Government. And the majority.

Attempt to share responsibility. Then, most likely, there will be a coalition between “Servant of the people” and “Voice”. Then in some way, in principle, to amortize all these things …

There is a postulate: the government votes – the opposition make noise. And because of this, in a country where there is no war and there is a growth of society, for opposition is better when authority makes some mistakes. Because then they replace authority. Since we have a war and there is a Russian aggressor, of course, we would like not just to noise, but to promote that there are better changes in Ukraine. And a mono-coalition is closer to a dictatorship. Because of this, it would still be more right for Ukraine to at least have a coalition … at least of two factions … And this would at least be a safeguard against authoritarianism. It’s a little balanced though. In principle, we will see in the near future. But Zelensky must have a clear understanding of whether there will be a mono-coalition, whether it will be a coalition of two … in any case, he has already opened the first envelope. There is such a parable about three envelopes. When you come to authority, the predecessor leaves three envelopes. The first envelope says, “Criticize the predecessors.” The second envelope says: “Promise.” And in the third envelop it says, “Prepare three envelopes.” After President Zelensky has already been elected with a 73% result, after the fact that there is a majority of Zelensky in the parliament, and he is able to make the government himself, he will no longer be criticized. Because at least we have to promise. So, because I leave at this county, and my children live here, will hope that the shifts are for the better.

– And what do you think which of the two options is more likely?

– Since the main providers of political in the quotes of the “Voice” are Pinchuk and Suras, then I would give 50 to 50, which will be either a mono-coalition or a coalition for two. In this part, the worst is Tymoshenko. She wanted to become the Prime Minister, but she will not. And, in fact, since both Zelensky and Vakarchuk stated that they are leading the circle of changes, then this homeland does not fit the “Batkivshina” … I would give the least chance that the coalition will be for three. It is clear that there can be no coalition with Poroshenko. And in order to avoid active confrontation in society, there will be no official coalition with Medvedchuk either.

– This is the formation of the Cabinet of Ministers. For both the government and the budget committee, this is budgeting for next year. This is one of the key issues. The situation in the economy is complicated, and although many from the current government have talked about how cool it is… but the problems are more than enough. And preparing the next year’s budget and next year’s financial constitution are the most important tasks. It is clear that Zelensky and his team, having tasted blood, having seen the result, will try to schedule early elections to local governments sometime at the end of November. There is such a trend and I think they will work on it.

– What about the laws?

– Oh … Let them first of all balance and adopt the budget. If they adopt a budget that is balanced, serious, and will ensure that at least one industry in Ukraine is reformed, I think that in principle, at least by the end of the year, this government will fulfill this coalition.

Probably, the decision on impeachment will be made though about the commission of inquiry, many other things Zelensky didn’t sign, though the Verkhovna Rada has accepted. There will be other laws, I do not exclude the efforts to continue the lustration law, the attempt to continue the lustration of people who worked from 2014 to 2019. In principle, I do not rule out that there will be attempts to amend the law on language.

– The key issue is quotas. This is what public institutions need to communicate in the Ukrainian language, it is teaching in schools in Ukrainian.

– Do you think it can be canceled?

– Well, at least I know that in the depths of the Zelensky team there are such moods. But this is a very annoying question, and if taken for it, then there will be problems for this president, this majority, and the cabinet..

– Before the elections, various studies showed that the Ukrainian people see Prime Minister Yuriy Boyko, Yulia Tymoshenko, and some people considered him to be Groisman, who do you think can lead the government?

– I do not exercise in guesswork. and, in fact, in this part, the Prime Minister will try to appoint one who will not have political ambitions. Why when Yanukovych was, always Azarov was the prime minister? Because this man never even intended to run for president of Ukraine.

There are pros and cons to this. I cannot say that this is only a minus. Actually, if a person is going to do business with the mistress, the economy … We remember Balcerowicz, who is still mildly disliked by the Poles, not to mention when he carried out the reforms … But this is the “Polish miracle” laid by Leszek Balcerowicz’s reforms. And because of this, let’s say that many talk about Georgia’s reforms and only associate it with Saakashvili, but in fact, the ideologist and provider of those reforms was Kaha Bendukidze. And it was he who was preparing the reforms of the economy and did many sectors that contributed to Georgia’s growth.

That is, such people a-la Leshik Balcerovich, a-la Kaha Bendukidze, I think will look for those who together with Zelensky govern the country.

– I did not participate in the elections for several reasons.

First, I believe that the decision on early elections had a political character and that there was no hint of legal purity. It was a political decision. There were no legal grounds for holding early elections. The second question is that my own team was preparing for the snap elections in October. And if they happened by law, we would have participated. And the third component is that there are slightly different sentiments in society today. In his treatise Philosophy of History, Hegel wrote that every nation deserves its ruler. And today the Ukrainian people deserve their leadership. Such moods in society… As Ivan Stepanovich Plusch said, “it is impossible to put the spanless”. People have such preferences … They have the right to make such a decision … I think the pendulum of populism and the miracle of hope has reached its height. And as in Master and Margarita … Anushka spilled oil. In my opinion, the oil has already been spilled, and because of this the pendulum will swing towards competence, not layered, but genuine patriotism, understanding … And then you must go to the election campaign. As long as the pendulum is there, until Anushka not spilled oil, I think it`s early for the tram.

– This is what you said about the lack of critical thinking … And what do you think are the reasons?

The second question is not to forget about Russia’s manipulation of Ukraine’s public consciousness and the lack of active counteraction to the Russian aggressor’s hybrid war against Ukraine. This is the set of components why this situation happened.

Interview was prepared by Misha Romanovich

So what is actually Ukrainocentrism?

Demand Ukrainian – Protect the law on the language